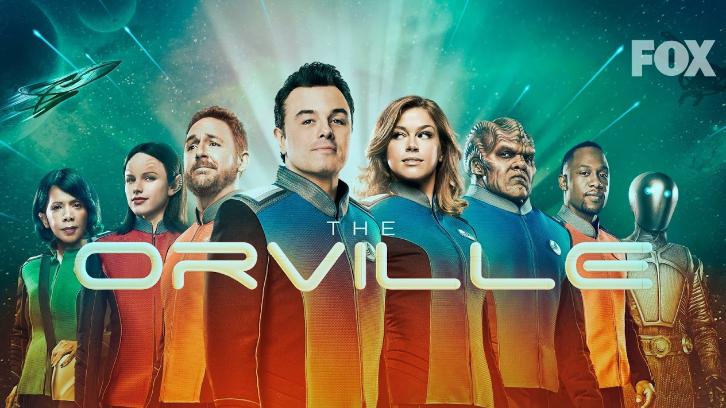 With season 2 in production (scheduled for release in late 2018), I thought I’d revisit Seth MacFarlane’s latest TV endeavor. The Orville premiered on Fox, on September 10, 2017, and the last episode aired on December 7, 2017. The entire Season 1 is available for streaming on Hulu, or for electronic purchase Google Play, Amazon, iTunes, and other online vendors.

The series follows the adventures of the titular mid-sized exploratory vessel, The Orville, and its largely dysfunctional crew. The Orville is one of many ships that represents the vaguely defined ‘Planetary Union,’ an interstellar alliance of planets in the 25th century (by Earth measurements).

Coming off a slump a year after a painful divorce from his wife (whom he caught cheating with a blue-skinned alien), Ed Mercer (played by Seth MacFarlane) is finally given the chance to take command of his own ship. To Ed’s dismay, unfortunately, the fleet assigns the vacant First Officer position to his ex-wife, Commander Kelly Grayson (played by Adrianne Palicki), with whom he must learn to coexist.

Additionally, the crew of The Orville includes:

Despite a setup that seems to be right out of a Family Guy inspired comedy, the show follows a standard dramatic/sci-fi format much akin to the Stark Trek shows of the late 80s and 90s.

Except for an astounding sense of visual aesthetics, the long-awaited first episode of The Orville, “Old Wounds,” was a major disappointment.

The pilot had perhaps the most comedy out of all the episodes of season 1, and though Seth MacFarlane fans (such as myself) may have been pleased with the prospect, it didn’t really work out as well. The jokes felt disappointingly flat, forced, and ineptly out of touch with the characters. You can shuffle the lines between anyone in the show, and you’d hardly know the difference. The episode fails to present characters with unique or interesting personalities, and solely relies on generic and overused sci-fi tropes.

Nearly every member of the crew is introduced by means of clunky, first-draft dialogue riddled with lazy exposition. In one scene where the whole crew is gathered, captain Ed Mercer appears utterly unfamiliar with even the most basic information about the alien members of his crew – despite the fact that they all live in the same Planetary Union – thus forcing the characters to introduce themselves to the audience. Though the scene is relatively short, it is toxic to the episode because it denies its characters the chance to define themselves through action.

Seth MacFarlane borrows a lot from Star Trek: The Next Generation in the pilot – the same optimistic outlook, bright visuals, half-militaristic half-scientific mission statement –  and this unfortunately includes the choppy beginnings that Next Gen was faced with.

Following the first episode, the series saw a meteoric rise in the quality of its writing. While the next few episodes still carried over some of the pilot’s faults (they never really figured out how to do exposition properly), the show successfully turned its focus on character development, good drama, and meaningful social commentary.

Every main cast member had a chance to shine. The second episode, a partial homage to The Twilight Zone, focuses on The Orville’s Alara Kitan, the security officers, as she struggles to obtain the confidence for command. In episode 6, the Captain and his best friend, Ed Gordon infiltrate an enemy ship in an espionage mission, while in episode 8 we follow around Dr. Finn and Isaac who have crashed on a planet devastated by famine and disease. Though the show is not serialized and features more or less stand-alone episodes, the characters have been anything but static. Dr. Finn develops an unlikely relationship with Isaac and Yaphit (the first friendly, the second … ambiguous). John LaMarr, a relatively minor character, advances from a simple navigator to the Orville’s chief engineer. And of course, there’s Captain Ed Mercer and his ex-wife/current First Officer, Commander Kelly, who in almost every episode struggle with their feelings for each other, and the impact that those feelings may have on their duty. In the last episode of the season they decide that, all things considered, it is best to put their love aside.

The first season of The Orville has demonstrated that the writers of the show know how to create interesting characters with involved backstories, even if the on-screen presentation is sometimes lackluster. John LaMarr turning out to be a genius in the episode “New Dimensions” came out of nowhere. One could possibly point to ‘hints’ here and there, but nothing to ease up the sudden transformation.  Nevertheless, seeing John in that Chief Engineer position was refreshing. It ensured us of the show’s willingness to move forward, make changes, and give its characters the respect they deserve.

Perhaps the most note-worthy feature of The Orville’s first season was its attempt at social and political commentary – this another direct inspiration from shows like Star Trek. Obvious examples include episodes 3, 4, 6, 7, and 12, with religion (or religious-like obsession) providing a main target of such commentary.  Episode 4, “If the Stars Should Appear,” deals with a civilization living in a bio-ship who, unaware of their circumstances, have wrapped their lives around a false creation myth that has inspired a ruthless theocracy. A loose remake of a TOS classic, Episode 4 is my favorite, not only because of its subject matter, but also because of simple sense of wonder present throughout the episode.  This is something I haven’t seen in sci-fi for a while. “If the Stars Should Appear” features several shots of our characters walking through the ship in complete awe of the technological achievement that it represents. They don’t rush through it. The director lets the camera linger, allowing for the audience to feel the vastness of that ship, just as the crew does.

Episode 12, another remake of a Star Trek beloved (this time ST: Voyager’s “A Blink of an Eye“) treads along similar, albeit more ambitious lines. The Orville stumbles on a planet that phases in and out of our universe every 11 days, though whenever the planet disappears, 700 years pass on its surface. During their first visit, Kelly becomes the accidental idol of the planet’s inhabitants. A religion is born, and over the next couple of millennia innumerable people die as a result of it. The parallels with Earth are striking. In a deliberate move by the production team, the aliens look exactly like humans (not a single distinguishing feature separates them from us). Their civilization, architecture, culture, sense of fashion, and progress of scientific development mirrors that of our own. The message is too on the nose at times, but it works. It serves the optimistic outlook of the series, that even though way may go through some tough times, through some growing pains, humanity will persevere.

Hopes for the second season

No significant details have been revealed about the Season 2 other than some new additions to the cast. Nevertheless, I am certain that the show will continue its attempt at social and political commentary, and I welcome it. The writers could perhaps try to be a bit more subtle – after all, no likes a preachy show – but one could argue that we live in a time where overt criticism is essential.

The first season had all the makings of a traditional sci-fi show, modeled after Seth MacFarlanes favorite, but we didn’t get much of what I’d consider the high-concept, mind-blipping type of sci-fi stories. The type of stories that twist our understanding of science and logic to create something inspiring. Episodes 4 and episode 12 somewhat fit the description, but they were both remakes of Star Trek episodes. I’d like to see The Orville come up with something original that will blow my mind, just as Star Trek did with “City on the Edge of Forever,” “Cause and Effect,” “The Inner Light,” etc. . This is what makes good sci-fi stand apart from other forms of fiction.

Either way, I’m looking forward to the second season.