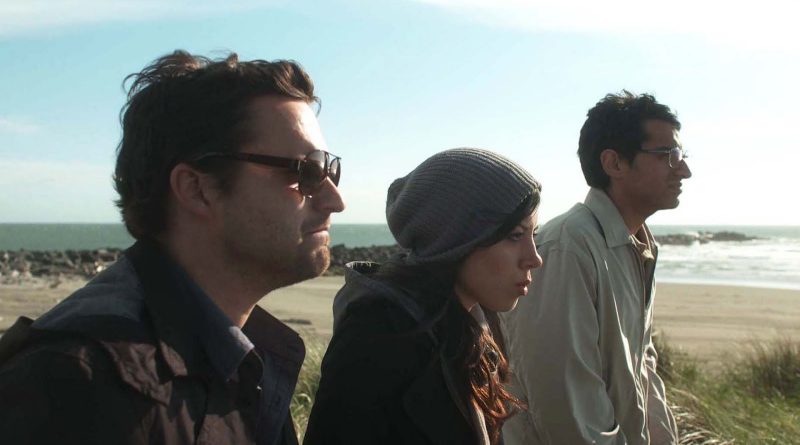 Safety Not Guaranteed was directed by Colin Trevorrow, from a screenplay written by Derek Connolly. It stars Aubrey Plaza, Mark Duplass, Jake Johnson, and Karan Soni.

Darius works as an unpaid intern at a Seattle-based magazine and lives at home with her father. She’s trying to find a paying job and move out, but has so far been unsuccessful.

One day at work, Jeff, one of the magazine’s writers, suggests to write a story on a classified ad about time-travel. A man is seeking a partner to go back in time – Safety is NOT guaranteed. The lead editor approves Jeff’s story and sends him to Ocean View along with two interns, Darius and Arnau, to research the man who wrote the ad. Jeff has an ulterior motive for wanting to go to Ocean View, however: he’s secretly hoping to reconnect with an old girlfriend, Liz.

Jeff, Darius, and Arnau track down the man who posted the time-travel ad in the newspaper. He goes by the name of Kenneth Calloway and works at a Grocery Outlet. He’s deeply engrossed in government conspiracy theories and obscure physics, mostly about time-travel, and frequently contacts government scientists online to discuss his theories. Jeff meets with him and feints interest in his time travel ad, but Kenneth does not trust him and refuses his offer.

After his failure, Jeff asks Darius to try. She meets Kenneth in the Grocery Outlet where he works and slowly approaches him about the time-travel ad. Kenneth is intrigued by her quirky and disinterested attitude, but needs to test her first before he can accept her as a partner. And so he does.

Over time, Darius gains Kenneth’s trust as he puts her through his “personalized” training regime. This brings them closer together and Darius can’t help but develop feelings for her “partner.” When Kenneth asks her why she wants to go back in time, she answers that she wants to prevent her mother’s death, for which she believes she is partly responsible. Kenneth also wants to go back in order to prevent a death: that of Belinda, his first (and probably only) girlfriend.

In the meantime, Jeff spends most of his time in town tracking down Liz. When he first sees her from a distance, he’s greatly disappointed by her looks and only begrudgingly does he agree to meet with her. However, after a few dates Jeff begins to think much better of Liz. Eventually they sleep together. Jeff, now completely infatuated with Liz, asks her to move with him to Seattle. Unfortunately, Liz is not ready to move. She thinks of her time with Jeff as nothing more than just another temporary fling. Jeff storms out of her house filled with disappointment and anger.

Jeff hopes to drown his sorrow in a night of drinking and partying with Arnau. He makes it his goal to help Arnau through his social awkwardness and, more importantly, get him laid. They meet some local young women in front of a liquor store and spend the night with them.  The next morning Jeff’s boss calls (whom Jeff has been keeping updated on the case) to inform him that this Belinda character is still alive. Darius is very disappointed to hear this.

Darius interviews Belinda and finds out the she and Kenneth never dated. They were only friends because they worked in the same restaurant together. She added that, after she quit that job, Kenneth drove his car into her boyfriend’s home. Melinda had convinced her boyfriend not to press charges out of pity for Kenneth.

When she leaves Melinda’s house, Darius is approached by two government agents who want to ask her about Kenneth because they think he might be a spy. Jeff interferes by saying that they’re only writing a story on him are not otherwise involved, after which the agents leave her alone. Jeff, Darius, and Arnau leave the premises and head towards Kenneth’s house.

There Darius confronts Kenneth about Belinda and questions his time travel story. Kenneth sticks to his guns, however, and claims that Belinda’s presence only means they’ve successfully gone back in time and prevented her death. Jeff comes into the room to inform Darius that the two government agents have followed them. Kenneth recognizes Jeff from their previous interaction and when he finds out that Darius also works for the magazine, he storms out of the house.

Darius follows him to a small boat on a lake where Kenneth appears to have built his time machine. She apologizes to him, explain that despite her initial intentions, the feelings she has for him are real. Kenneth accepts her apology and invites her onto the boat. He activates the machine, and to everyone’s dismay, he and Darius disappear. It was a real time-machine after all.

Before I jump into the review portion of this film, I’d like to comment on its status as science fiction. Is Safety Not Guaranteed a science fiction film? Not that I’m a genre purist or anything like that, but since this is a site devoted to SF, it seems proper to address the question.

The simple answer is certainly yes, Safety Not Guaranteed is a science fiction film, as the last scene of the movie firmly cements it into the genre. After all, if a time-travel story doesn’t cut it, then nothing will. In Safety Not Guaranteed, the idea of time-travel is ubiquitous throughout the film, to a point that everything happens because of it, and sometimes in spite of it. Time-travel drives the plot, it motivates the characters, and at the end of the movie, it literally happens.

On the other hand, if one brings out their slightly more cynical self, the ending of this film bears a different interpretation: that of delusion and wishful thinking. Did Kenneth and Darius really go back in time? Or was the last scene on the boat just another one of Kenneth’s deluded fantasies? The film spends so much time and effort trying to convince us he is a paranoid, conspiracy-obsessed nut-job, that we are inclined to distrust the ending—or at the very least, to question it.

That begs the question: Does a story qualify as SF when it contains SF elements that are, however, imaginary within the world of that story? I don’t really know. But, since I have chosen to review it, part of me certainly considers Safety Not Guaranteed a science fiction story.

Now, on to the review.

Safety Not Guaranteed is a movie steeped in deception and misdirection, to a pleasing effect. It flirts with the ordinary and the mundane to appeal to our more conventional senses, yet under the surface, it hides a richer sensibility that sets it apart from the crowded arena of overdone rom-coms.

Despite its science fictional overtones which may or may not exist (see paragraphs above), Safety Not Guaranteed most certainly qualifies as a typical romantic comedy. For one thing, the filmmakers make use of every trick in the book of rom-com clichés.

And then, there’s the two side-characters: a stereotypical nerd forced to come out of his shell; and the successful jock who must, for the first time in his life, learn humility. That, and so much more that fits the bill.

At some point, however, these tropes are consciously subverted and go in a direction that the audience may not expect. When Jeff (the “jock”) takes Arnau (the “nerd”) out to party, it is mostly to get him laid with a couple of high school girls. No long bonds are formed and no important life lessons are learned. Any solace Jeff experiences is temporary.

As for the main plot-line, that of Darius and Kenneth, the film subverts the audience’s expectations in the most unusual way: it doubles down on them. In line with the rom-com formula, we expect that the two leads will reconcile in the end and forgive each other’s indiscretions. They do, but only because the fairy-tale world they created for each other turns out, against all odds, to be real. The movie lets us think until the very end that Kenneth’s “pseudo-scientific” ramblings are bullshit, and then we see that they are not. It works, if only simply because the story cannot have any other possible logical conclusion for the lives of its broken characters, other than to literally have them go back in time and start everything over.

A lot of the film’s charm relies on its main cast. Audiences will find Darius quite familiar, as she’s presented as an extension (and perhaps a more complete version) of Plaza’s other well-known character at the time, April in Parks and Recreations. I found Darius more interesting and better-written than April (certainly more nuanced), though I don’t think that Plaza does a lot to distinguish between the two. Her performance here is adequate, though a constant reminder of April. That helps her in under-playing some of the more tragic elements of her character (like the death of her mother, for instance), but also keeps her limited in a rather one-dimensional portrayal.

The opposite can be said about Kenneth. Mark Duplass’ charismatic performance of the conspiracy-nut turned genius scientist brings forth much more than what the character is worth on paper. We see very little of this alleged genius. Hardly anything, actually. Even his silliness and immaturity are rather uninteresting for a person whose sole reason for being in the movie are said silliness and immaturity (as attested by the reason Kenneth gives for going back in time). Duplass is the one that makes Kenneth come alive by giving him just the right amount of heart, sophistication, and earnestness to keep us engaged.

As a concept-and-character driven story, Safety Not Guaranteed exhibits little to no visual ambitions. It is conventionally shot and doesn’t let any fancy camera work getting in the way of the story. Nevertheless, the filmmakers manage to make great use of its unique Pacific Northwest setting. Whether it is the open space of the ocean shores, the deep and dense forests of Washington State, or even the eccentricities of a Seattle-based magazine office, the films integrates its setting seamlessly into the subject matter until the two seem inseparable. So often we see stories pick a setting just for its convenience or exoticism, thus rendering it meaningless. Thankfully, that is not the case here.

In the end, Safety Not Guaranteed offers an eccentric combination of the usual and the unusual that will almost certainly please its viewers. It is so charming that even its occasional cynicism feels well-intentioned. At its best, the film is bound to leave everyone with a warm feeling inside them; at its worst, it will make one chuckle at its silliness. Either way, I highly recommend it.