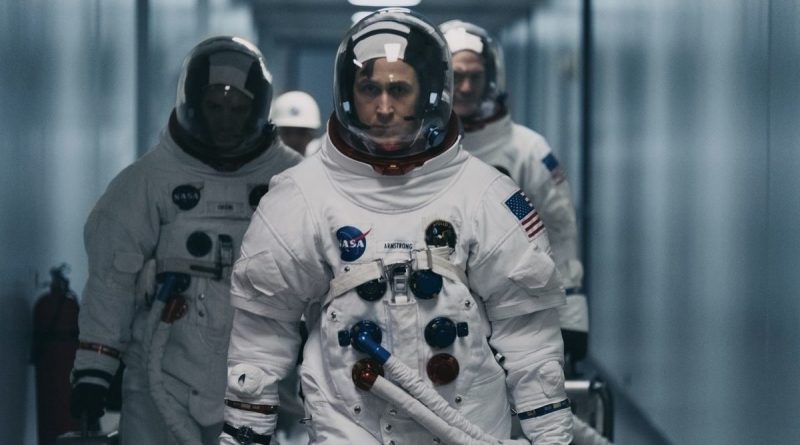 After his infant daughter dies of a brain tumor, test pilot Neil Armstrong applies for NASA’s Gemini project. The goal of Gemini is to prove that two vessels can dock/undock in space, a necessary milestone on the path towards a manned trip to the Moon, and towards victory against the Soviets in the Space Race. Armstrong gets the job and moves to Huston along with his wife, Janet, and their one son. There, the couple has their second son.

The project moves forward at a steady pace, though not without setbacks. The death of two pilots seem to have a strong effect on Neil, furthering his social withdrawal. Nevertheless, he is selected as the commander of the Gemini 8 mission, the first to attempt docking with another vessel. Under Armstrong’s command, the Gemini successfully docks with the unmanned Agena, but a malfunction a few hours later causes the ships to spin at a rapid rate. Neil barely manages to regain control of the ship before passing out, and returns to Earth. Though criticism ensues, the mission is termed a success, and thus, the Apollo program is approved. Neil’s friend, Ed White, is chosen to command the first Apollo mission.

In the meanwhile, Neil’s wife is having increasingly harder time accepting her husband’s deadly line of work.

Unfortunately, the Apollo 1 mission results in tragedy when the cockpit catches fire with all three astronauts still inside. The crew dies, launching Neil into further depression and withdrawal. He perseveres, however, and is eventually chosen to lead the Apollo 11 mission. Missions 2–10 have been successful, paving a clear way forward. No other obstacle remains, and if everything goes as planned, Neil will become the first human to land on the Moon. He is ready, but his wife, Janet is not. Neil needs to prepare his  kids for the eventuality that he might not make it back. He talks to his kids, and then leaves for the mission.

As history records, the Apollo 11 mission is an astounding success, and Neil is the first man to walk on the moon. They reach the Moon, land, and safely return to Earth. There, they have to spend a month in quarantine, though show no sign of disease. Janet visits Neil in quarantine where they share a quiet moment of reconciliation.

Once more, here’s a review for a movie that is not science fiction, but has impeccable ties to the genre.  The Moon Landing was undoubtedly one of humanity’s most groundbreaking scientific and technological achievements—as well as the culmination of political rivalry. A tipping point in the space race, the success of Apollo 11 represented the first victory for the US in the space race, the one that ultimately turned the tide and opened the way for future US-Soviet collaboration. At the same time,  it was a dream come true for SF writers everywhere, and the second realization of science fiction’s most daring predictions; the first being the atomic bomb.

Damien Chazelle’s First Man depicts not just the experiences of one man, but rather the collective journey of a nation towards a common (and perhaps selfish) goal through the eyes of one man—the titular first man. The road to the Moon was a journey paved in sacrifice and glory; one marked not only by scientific genius but also heartache and stamina. What 2001: A space Odyssey was for science fiction cinema, First Man is for science fact cinema.

Unlike 2001, however, to which Chazelle pays homage, First Man takes a far more personal approach and sticks narrowly to Neil’s point of view. We see what he sees, hear what he hears, even feel the tremors that he feels (assuming a theater with a decent sound system). In First Man, there’s no giant spaceship trudging magnanimously across the silver screen; only a tiny speck of glittering light floating in the emptiness of space. Most flight scenes are spent inside the ship, conveying the fear and anxiety, but also thrill, that is associated with early spaceflight. No other space movie has achieved this level of gritty physicality and immersive realism. 2001 is credited as one of the most realistic SF movies of all time, but its realism is of an entirely different kind.

The film’s opening scene(s) exemplifies best the style and tone that the rest of the film follows. We start right away with one of Armstrong’s earliest taste of spaceflight as he shoots above the atmosphere and observes the glowing blue curve that is Earth’s surface. He almost doesn’t make it as his craft bounces on the atmosphere. It’s only through ingenuity and perseverance that he manages to come through.  Later, Armstrong describes this experience as:

The scenes that immediately follow Neil’s first foray into space shift Neil’s journey into a different perspective. Karen’s struggle with cancer and subsequent death remains with Neil for the rest of the movie. It defines him and much of his interaction with his work. It establishes Neil as a withdrawn and unemotional man who devotes all his time and energy to NASA, almost entirely neglecting the needs of his wife and children. He always follows through and does the right thing, but never lets his attitude betray his emotions. Gosling, not a stranger to stoic and silent characters, was an excellent choice for First Man and an example of how good casting enriches an already great script.

The only other actor who comes close to Gosling’s screen time is Claire Foy, portraying Janet Armstrong in an equally astounding performance. She is the emotional anchor of the movie, the necessary element that keeps Neil (and some of the other NASA scientists) grounded.

“You’re a bunch of boys making models out of balsa wood! You don’t have anything under control.”

She screams at mission control during the Gemini 8 mission when the radio goes silent. It’s clear what the filmmakers were trying to show in Janet’s character: the housewife who has to contend with her husband’s wild adventures in space, fearing constantly for his life. Foy accomplishes this superbly. The problem, however, is that we have seen this exact character many times before, and First Man does nothing to make it unique or different. It’s an interesting editing choice to cut back and forth between Janet and Neil during the Gemini 8 mission, but the scene goes no further than that simple juxtaposition. Her anger and concerns are overshadowed by what follows and we forget about her until she’s back on the screen. A shame, because her story is one that deserves attention.

Chazelle and cinematographer Linus Sandgren choose to shoot the movie with a combination of 16mm, 35mm, and 70mm (only for the moon landing scene), resulting in a rich and diverse visual experience. The ‘grainy’ look and handheld Cinema vérité style in certain scenes do much towards adding to the overall realism and immersion of the film, which only breaks for the highly stylized trip to the moon. Similarly, the sound design, which ranges from ultra-realistic creaks inside the spaceship to the highly stylized breaking of the glass when Neal learns of the Apollo 1 disaster, complements this experience. All in all, this is a technically flawless film.

First Man is, without a doubt, one of the best films of the year so far and a likely candidate for the OSCARs. It’s a story that scales masterfully between the global and the individual as it navigates through a journey unlike no other. A film that could not be further way from something like La La Land, First Man serves as a solid indication that the team of Chazelle and Gosling are a cinematic force to be reckoned with.