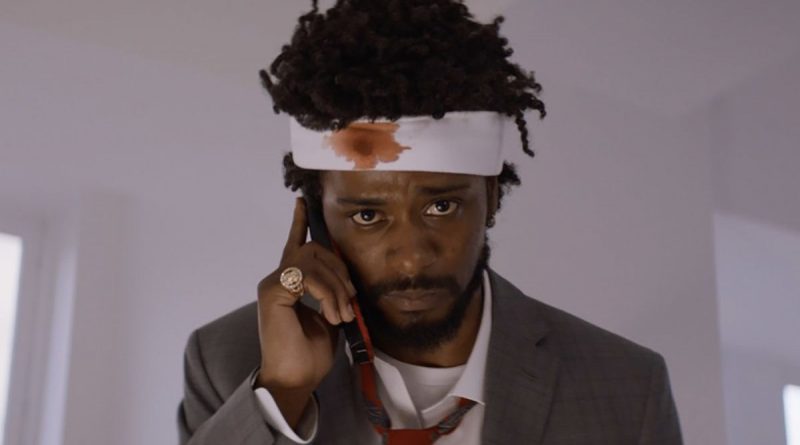 Desperate for money and late on the rent, Cassius “Cash” Green applies for a telemarketing job at a company called RegalView. Cassius lies on his resume, but the RegalView manager who interviews him interprets that act as initiative and therefore hires him anyway. Although the job is entry-level and paid by commission only, Cassius is told that with enough sales he may be promoted to the mysterious position of a”Power Caller.”

At first Cassius fails to make any sales.  His numbers drastically improve, however, when he discovers his “white voice”—i.e. the ability to sound confident and carefree on the phone. He soon becomes the top salesman on his floor.

Squeeze, one of Cassius’ coworkers, attempts to organize a strike, lobbying for the establishment of a telemarketing union that will give the RegalView’s employees better pay. Cassius participates in the strike, but before he can do much he finds out that he has been promoted to a “Power Caller.” He  soon discovers that Power Callers sell weapons and cheap human labor to rich corporations. One of RegalView’s biggest clients is a company called WorryFree, involved in selling “lifetime work contracts” to people in need—a practice compared to slavery, though cleared by the senate.

Despite some initial qualms, Cassius settles quite well into his new job. In fact, he finds that he’s quite good at it. As Cassius rises through the ranks, the quality of his life improves greatly, though his relationship with his girlfriend, Detroit, slowly disintegrates. At the same time he stops participating in Squeeze’s strikes.

Soon, Cassius gets invited into a private party thrown by Steve Lift, founder and CEO of WorryFree. He hopes to make an impression at this party.

At the party, Cassius seems to get along well with Steve Lift. Lift wants to hire Cassius at WorryFree, but before they talk business, he offers Cassius a line of coke. Cassius takes it and immediately asks to go to the bathroom. On the way there, Cassius accidentally enters the wrong door and discovers a room with creatures looking like horse-men hybrids, begging for help. He panics and storms out of the room. Steve Lift finds him and explains that it is all a misunderstanding. The horse-men are previous WorryFree employees transformed into what he calls “Equisapiens,” a new species of better and more capable workers. Lift wants Cassius to turn into an Equisapiens, infiltrate their society, and pose as their “Martin Luther King” figure. Cassius outright refuses and leaves the premises. He does suspect, however, the coke he snorted was not really coke but the substance that turns men into Equisapiens.

The next day, Cassius confides everything to his girlfriend, Detroit, who had received a strange video message from Cassius during the night. Cassius informs her that it could not have been him, since he lost his phone last night at the party. They check the message together and find that it came from a group of Equisapiens inside Lift’s mansion. Cassius now has proof of Lift’s scientific experiments. He decides to make the video public in hope of bringing WorryFree down, but all his pleas fall into deaf ears. Nobody seems to care.

Cassius realizes he needs to take matters into his own hands. He rejoins Squeeze’s strike and organizes a riot against the police. He finds a way to free the Equisapiens from Lift’s mansion and invites them to the riot. The police are no match for the Equisapiens, who wreak havoc on the city. The strikers have won.

Not all ends well for Cassius, however. The next day, when it looks like everything’s returned to normal, Cassius turns suddenly turns into an Equisapiens. He was given the serum after all. The film ends with a group of Equisapiens, led by Cassius, breaking and entering Steve Lift’s mansion.

Sorry to Bother You is Boots Riley’s directorial debut, a polemic science fiction comedy that skims the edges of  absurdism, satire, and eye-rolling heavy-handedness. Though impressive in its intellectual vigor and mastery of film-making technique, I can’t imagine Sorry to Bother You will raise many eyebrows or stir anyone’s consciousness. It is little more than a simple statement of the film-maker’s political beliefs, albeit a somewhat entertaining one.

The movie is set in an alternative city of Oakland, California, a setting that the filmmaker hopes will be different enough to pass as a fantasy, but also close enough to sound plausible. Alongside real streets and buildings of Oakland, real people with realistic problems, there are fantastical and exaggerated elements such lifetime “slavery” contracts, mass-murder telemarketing, and serums that transform men into horse people with horse-sized genitalia. All speculative and highly amusing, though given under the guise that it’s not too far from the truth, even if only in a metaphorical sense. In other words, Boots Riley’s film is an allegory, a cautionary tale of sorts that warns us against the dangers of Capitalism, corporate greed,  and modern consumer culture.

Unfortunately, that’s where the film’s intellectual merits end. Its message, though valid to a certain extent, is relatively straightforward and devoid of nuance. It leaves no room for any follow-up dialectic and offers only validation for those who already agree with what it has to say. Boots Riley could simply walk up to you and say “Capitalism is bad because X and Y,” and would achieve more-or-less the same thing.

In part, the film’s issues stem from that fact that the drama does not live up to its premise or its intentions. The film’s somber ideology does not emerge from narrative or character development. Instead, it is bluntly told to the audience, served out cold under the thin veil of allegory.  From minute 1 until the very end, the plot feels secondary, as the message of the movie takes precedence over storytelling. Characters are archetypes, cardboard cut-outs seemingly devoid of any agency, placed where they need to be to serve the message. Their motivations are messy and undefined, if not non-existent.

The film doesn’t even seem confident about its premise. For most of it, (2/3 of the film, actually!) the “white voice” appears to be the primary plot device—until it’s completely dropped  and replaced by the Equisapiens twist … totally out of nowhere. No mention, not even the slightest hint is made to justify their sudden appearance. They are shoved into the story for no reason other than to fit in a clunky third act. At the very least, this is bad writing.

Perhaps Boots Riley’s goal was to be blunt and unsubtle (perhaps that’s what he thought was needed), but it would have not hurt to do so with a more compelling story and cast of characters.

That said, I’d like to give credit where credit’s due.

For a film of its size and budget, Sorry to Bother You is a very good-looking film, filled to the brim with visual flair and ingenuity. It’s flashy, it’s imaginative, and above all else it knows how to keep the audience’s attention. For example, the scenes where Cassius makes his first telemarketing calls and his desk magically drops next to his customers are magnificently memorable. The film takes full advantage of creative editing and cinematography, and the filmmakers show that they’re not afraid to experiment with technique—a refreshing attitude in today’s cinema.

In Sorry to Bother You, Boots Riley demonstrates an impeccable sense of timing (so important in a comedy), placing characters and events where they need to be exactly when they need to be there—like the scene in the garage where the door opens just as Cassius and his girlfriend are about to make love. The comedy wanes as the plot moves forward, but I did appreciate the overall playful tone of the film.

Similarly, the actors do a great job with what their given. Lakeith Stanfield does not disappoint in the role of the protagonist, expertly carrying through the subtle changes that his character undergoes throughout the movie. His undermined-yet-carefree demeanor goes a long way into making Cassius interesting, perhaps more so than his scripted persona deserves. Tessa Thompson who plays Detroit, Cassius’ girlfriend, was also marvelous, even if her character was nothing more than a caricatural stand-in.

All things considered, Sorry to Bother You is undoubtedly a fun movie to watch, but it fails to do what every film of its kind must: to be more than just a manifesto. If I had to recommend it, it’d be under the category of “interesting yet not-so-successful experiments in political film-making.”